Tornionjoki (Torne älv in Swedish, Duortnoseatnu in Sami language, Tornionväylä in Meänkieli) is a river that’s 510 kilometres long, located in northern Sweden and Finland. The river begins from Sweden, but the downstream south from where it meets Muonionjoki, is on the border of Sweden and Finland.

Tornionjoki starts from Torniojärvi, located in the Swedish town of Kiruna, and flows into the bay of Bothnia, on the border of Tornio and Haaparanta. The side rivers of Tornionjoki are Lainiojoki, Muonionjoki, Tengeliönjoki and Könkämäeno. Over half of the upstream water of Tornionjoki flows from Pajala’s Junosuvanto down the Tärännönjoki, which is over 50 kilometres long, and into the Kainuunväylä, also known as Kalixjoki. This phenomenon is known as bifurcation. The bifurcation of Tornio’s Kalixjoki is the second largest in the whole world.

Information on the quantities of salmon trying to get to the river to reproduce and the timing of it is needed, so it’s possible to manage the salmon population and regulate fishing. The centre of natural resources is following the salmon moving up to Tornionjoki and Simojoki with sonar from the end of May to the end of August, when the graphs are being updated as much as possible.

Salmon and sea trout of Tornionjoki

The salmon swim up Tornionjoki all the way from downstream up to the mountain areas, and they reproduce in it. Salmon population was deteriorating on the same time with the other salmon populations in Gulf of Bothnia on last century, and especially on its latter half. This is when overfishing reduced the amount of spawns so much, that salmon were born in even smaller quantities.

Salmon population was at its weakest in the 1980s. Since then, the stricter fishing regulations in the Baltic Sea increased the number of salmons which made it all the way up to the river, so there was more salmon spawning than before. Fry mortality caused by M74-syndrome was on its peak during 1992-1996, which has slowed down the recovery of salmon population.

Efforts have been made to recover the valuable salmon and sea trout population of these water areas, mainly by regulating fishing and planting fry. Fishing regulations have been both national and international. As a result of the recovery of salmon population, the supportive planting of salmon in Tornionjoki were terminated in 2004. 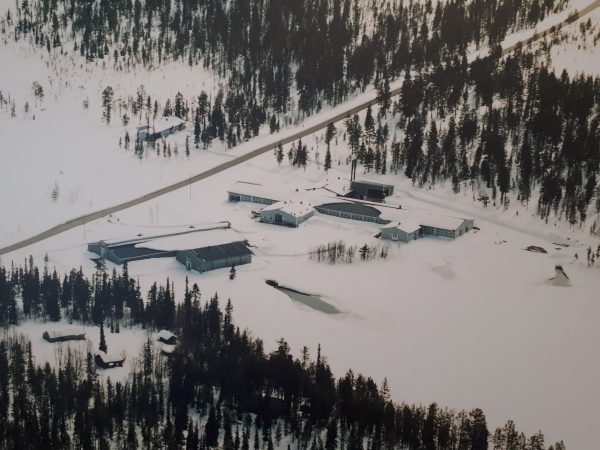 A fish farm in Leustojärvi

In the late 1980s, the production of smolt in Tornionjoki and Muonionjoki was only a few tens of thousands per year. The production potential of the river was estimated to be around 0,5 million smolt per year. It is now estimated that smolt production could be around 2 million, if not more. In the early 1990s the problem of salmon was M74, which at its worst destroyed approximately 90 % of the natural fry of salmon. M74 didn’t affect the planted fry, as the roe was received from fish in fish farms.

Salmon were mainly planted as river fry. On an annual basis, the quantities varied between 150,000 and 725,000 river fries. 15,000 to 85,500 smolt were planted annually. Plantations were also carried out with roe and newly-hatched fry. Planting was also done in the Swedish side of Tornionjoki and Lainionjoki. The adipose fin of all the planted fish was cut, except in 1995. This way, when looking at the adipose fin, one could tell which salmon was planted and which was natural.

Planting was terminated in 2002 as the natural breeding intensified. In total, approximately 8 million fries of salmon were planted from the farm of Leustojärvi during 1989–2002.

Special care was taken when distributing the fry to the spawning areas. The fish were transported and distributed to the rapids by boat, canoes, snowmobiles, quads, cars, and helicopters. By doing this, the most difficult and distant areas were also reached.

Salmon plantations were targeted to empty fry production areas. Areas with more natural reproduction weren’t used at all. By doing this, the salmon population was also recovered to areas where they had already disappeared completely. Now the river produces around 1,5 million smolt per year. The fry production areas from the downstream all the way up are being used. With fishing arrangements and successful support plantations, salmon has returned to Tornionjoki.