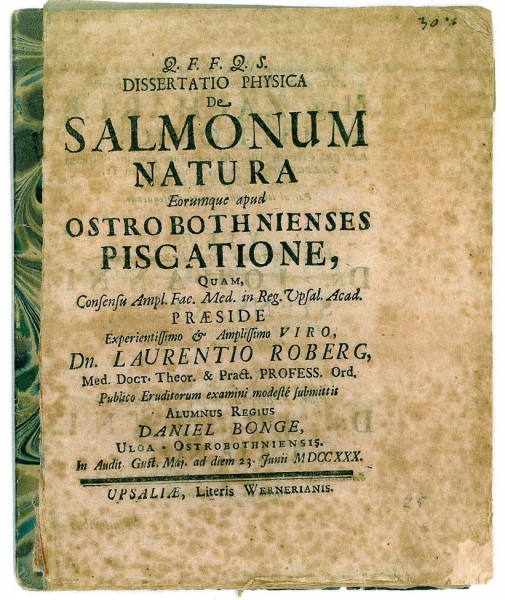 The first Finnish dissertation of the fishing industry was called Salmonum natura, which was written by Daniel Bonge, who was a son of a merchant in Oulu. On 23rd of June in 1730, in Gustav the Great’s lecture hall in Uppsala University, he was defending his Latin dissertation about salmon and the fishing of salmon with the consent of the medical faculty. The event was conducted by the professor of practical medicine, Professor Laurentius Roberg. The dissertation was typical to its time, where the wisdom is being presented in the field of comparative linguistics and natural science. It tells stories about salmon and gives instructions on how to cure salmon with salt. The following story shows well what Bonge’s dissertation was like: “When in 1650, Antti Yrjönpoika Lytraeus, the mayor of the city of Oulu, was returning from Stockholm by sea, crossing the waves of Gävle with nice tailwind, something happened. Once the sailors were done eating their lunch, a service boy happened to throw a silver spoon to the sea with dirty water, and the silver spoon happened to belong to his master, whom had received the spoon from his wife. The service boy was crying and confessed what he had done. There were also witnesses, who saw the bright silver spoon sink into the water. Mayor was a bit sorry at first, but then he said: “Let this be our only loss. This way I will save the reward, which I would’ve otherwise had to pay to the person told me who did it, because the items that the masters of the sea once take, shall never be returned to the surface”. With a favourable wind, the citizens of Oulu returned to their home city in three days after the event. Meanwhile, however, something had happened! The magistrate had its own salmon nets, which were auctioned annually. These nets were used to catch salmon every day. With these nets they had caught a large salmon, which was given to the mayor’s wife so it could be gutted and cooked. She was in a shock, when she found a spoon inside the salmon guts, which was the same spoon she had given to her husband before his travels. She thought of it as a proof, that the husband had been shipwrecked and taken by the waves, and the other family members agreed with her. Even the fact that a large spoon, that couldn’t be bent, had fit through the narrow throat of the salmon didn’t feel right to them. Salmon had already been cut, so it was preserved overnight, when they received the information that the mayor had returned, and their ship had arrived at the harbour. He thought it was amazing to see and touch the spoon he had lost to the open waters over 150 Scandinavian miles from Oulu. And to see the fish, which had travelled such a long journey in two days to return the lost spoon to his wife, felt unreal.” And this is how Bonge, albeit unknowingly, described the first fish entry!

In his dissertation, Bonge also explains the medical benefits of the salmon. For example, the sun-dried bile of a salmon was considered to be as good medicine as the bile of the bear. Bile was helping with stomach inflammations, when you soaked a small piece in strong booze. This bitter liquid also helped healing old wounds. The fat of the salmon helped with ear aches, and salted meat burnt into powder was a great medicine for open abscesses.

Bonge’s book even has salmon recipes in it. “Now we need to salt the salmon. After the guts have been removed by the river and the inside of the fish has been cleaned, they will be put in salmon boxes. When the fish has been cut from the middle twice, you will have four pieces. Sprinkle so much salt on top of the meat, that it is not visible. Salted fish will be left there until summer is over. On St. James’s day the fish will be removed, and salty water will be cleaned from insoluble salt granules. After this, place the fish into containers made of spruce, without adding salt. But the remaining salt water is poured into the container through the hole on the side, as without it the fish will rot”.

In the end he praises the excellent taste of the salmon, and how it tastes even better than the crayfish soup served by the cardinal of Sweden!