Abu has been important to many Finnish fishermen. When Nyt nappaan arrived at
the stores, it was always a sure sign of the summer, and it was read with great
interest.
The history of Abu is well known, and much has been written about it. One of the
most interesting is Len Borgström’s memoir, Snilledrag lyckokast och bottennapp,
which was published in 2003. It has also been translated into English, called ‘What
Happened?’ It hasn’t been published in Finnish though, and I wonder if anyone
would translate it?

Abu’s publications are also well known, and its flagship is Nyt Nappaa. The first
brochure from Abu was the Spinnfiske published in 1942, but adverts were
published in magazines before that. Daniel Skupie’s book Vintage Fishing Reels of
Sweden explains the history of Abu’s printed products very well. On page 17, he
reckons that Abu’s first advert would’ve been in Sportfisket in 1944.
When I was browsing the old Sportfisket-magazines, I found Abu’s adverts from
earlier issues than the one mentioned in the book. The first one I found was the
April issue of 1941. On page 81, there is a full-page advert for Record reels, and it
mentions that the guarantee care is treatments are handled by A.-B. Urfabriken
from Sväng. After this one, Abu’s adverts can be found from almost every issue of
Sportfisket.
Whether Abu advertised it in other magazines prior to this one is not known to me.
It can’t be much earlier though, as Göte Borgström produced the first commercial
Record-reels in 1941.
In 1948, the history of one of the most legendary fishing equipment catalogues,
Napp och nytt, began. However, some brochures were published before that. One of
the most impressive ones was definitely Ni kan lita på Record from 1946. It was also
published in Spanish and in English. Before that, a small booklet called Record fiske
was published in 1944. 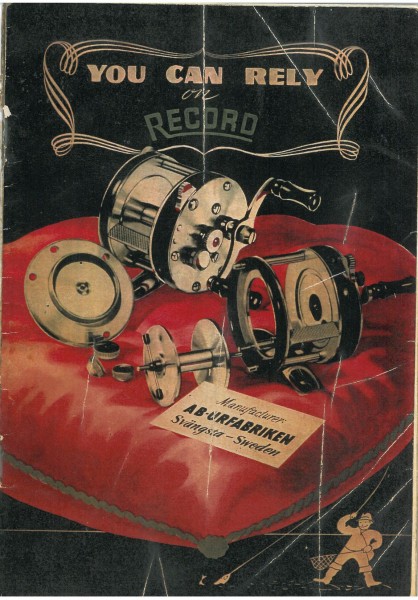 The least known department of prints is the spare part catalogue for reels and
instruction booklets. For example, Haspelspinn, published in 1952, contains a very

specific guide on how to cast. It also has two separate small stories, and the other
one of those has an explanation from Joseph D. Bates, a famous American
fisherman, on whether it is difficult to cast with a spinning reel or not. These spare
part catalogues are difficult to evaluate as collectibles because all of them have no
year of printing.
All of the early brochures of Abu are highly sought after by collectors, and that
shows in the prices. This has also attracted the scammers to make “latest editions”
of the earliest Napp och nytt catalogues, and it has been confirmed that there are
fake copies of Ni kan lita booklets.