Juhani Aho, a national fixture on the mantelpiece

Juhani Aho (previously known as Johannes Brofeldt) 11.9.1861–8.8.1921 has been celebrated nation-widely, previously in 2011, when it would’ve been his 150th birthday, and 90 years had passed since he passed away. People who enjoy older literature got to read Tuomas Hinttula’s Kirjamies Juhani Aho kalamiehenä, Panu Rajala’s Naisten mies ja aatteiden: Juhani Ahon elämäntaide and Martti Turtola’s and Tarja Lappalainen’s Kansalliskirjailija Juhani Aho. 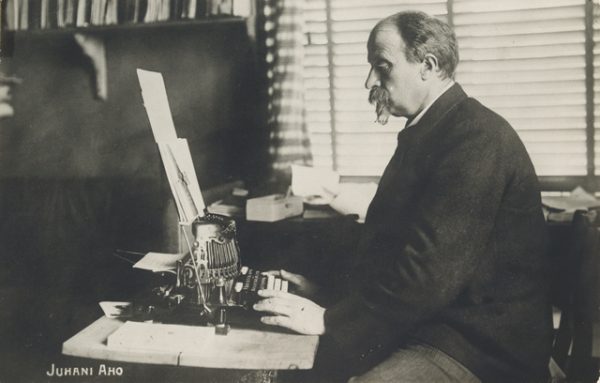 People who had previously written about Aho were for example his son Antti J. Aho (Juhani Aho, elämä ja teokset I-II 1951) and multiple literature historians, with so many pages and from so many angles, that a normal person had to stop and think if there was anything essential left to be said about him. That’s why I won’t go too much into the details when it comes to life of Aho, as it is already so well-known.

Juhani Aho was a jack of all trades; he was a newspaper man and a biblical translator, he made a living for himself and his family by writing, he was linguistically talented, a creator of Finnish language, a fisherman and a father, a nervous intellectual, national author, to mention a few characterizations.

His biography was exceptionally extensive, including approximately 50 books; the list can be found from Juhani Ahon Seura’s website. The time has taken its toll on the appreciation of some of the books, for example Rautatie (1884), Papin tytär (1885), Yksin (1890), Papin rouva (1893), Kevät ja takatalvi (1906), Juha (1911) and (before others) 8th part of Lastuja-series: Lohilastuja ja kalakaskuja (1921), which was known worldwide. The faith of the Lastuja-series is similar to the extensive production of Arthur Conan Doyle, as people only remember the private detective he created, Sherlock Holmes, and not his own novels which he appreciated the most. Difference is that Aho appreciated Lastuja-series; they brought content to his last fifteen years of life.

Most of the people who have read the book, have read the 2nd edition (WSOY 1956) or some of the later editions, and there are many of those. The book illustrated by Björn Landström differ from the 8th part of Lastuja-series; it’s missing the short stories Miten kala näkee and Kuinka särkiä ongitaan, and there is an additional short story called Näky.

It has been a surprise to many that multiple short stories had seen the daylight before the book was published, they were seen in for example Metsästys ja Kalastus magazine, in Stockmann’s Swedish sales catalogue, as a presentation in a club night of the sport fishermen, in annual publications of Tiede ja elämä, in Tidskrift för Jakt och Fiske magazine and Otava’s Joulu. This list isn’t complete.

As far as I know, Aho was influenced by 1800’s England, where the fishing stories were originally published in weekly magazines, and best stories were compiled in books published by the same publishers, who were behind the magazines. The same method is still being used in Finland today, some of my stories have been published in magazines, and the best ones were selected to the books.

Ensimmäinen onkeni describes the delicate nuances of the little boy’s mind and emotions vividly, explaining how he managed to get the first fishing rod from his father who was a priest, the first catch he got with it, and how all of this affected his adult life. Aho considered himself to be more like an angler than a writer.

In Metsästys ja Kalastus -magazine from 1921, when he had just gotten married, they published a small story called Kehukaloja. In that one, Aho made an observation that made me think as well; when you compliment someone in writing, there is no risk of interruption. As a location, Porkkala’s Lill-Svartö and Mikkelskär, thinking about distress and good mood. Why go to the salmon rapids when we have the sea? The thought that occurred one summer in Huopana paints a picture of Aho’s flexibility and adaptability. Aho even thought that spin casting was fishing, when he wanted to spend time on the water in a wealthy man’s boat. Poaching brought additional excitement to the situation, and the sea with its fish seemed to be a shared property. Later, when Aho got his own water areas, he began to guard them.

Ensimmäiset mulloseni, originally written in 1917 but published in Stockmann’s sales catalogue in 1921, acts as an introduction to Aho’s writing style, which grows and refines, and receives new nuances in later small stories from Huopana. Captain Ruth takes him to the rapids for the first time, with the aim that Aho would write an awareness text about small-scale farming; as a result, he wrote a leaflet about storing urine and manufacture litter soil.

Aho doesn’t like using an oarsman. Kokko teaches how to select a lure, takes them with him to the boat, and lowers the slough while giving instructions all the time. When a trout takes the bait, it feels like an electric shock traveling through Aho’s body. I need to do this, and I will angle these fish for my whole life, to be a part of fishing in this rapid or any other one. And Aho will be taken to the rapids, and the summers in Huopana begin. 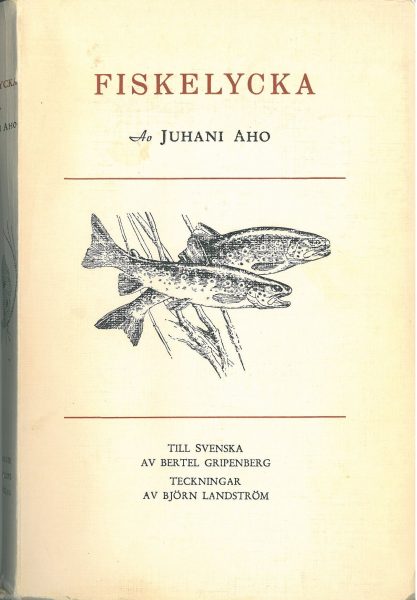 Koukkuvirta describes the trip of Aho and Armas Järnefelt to Heinävesi’s route in 1907, inspired by the article published in Tidskrift för Jägare och Fiskare -magazine, which advises to fish salmon from the deep inlets and streams inland. Although the name of the place wasn’t revealed in the article, Aho managed to find out that the article was about Heinävesi’s route, and the salmon sightings made in the downstream of Pilpankoski. After some nights without a catch, trout (3–7 kg) are caught with bait fish in the dusk of the day.

In small story Eräs urheilukalastaja Aho describes the man who was fishing in Huopana, dr. W. Lybeck, who had all the possible equipment, who was going back and forth the river, throwing far to the opposite shore and used a Devon, cap, and lure cap without being a lure fisher, and he pulled everything up with force. During one visit Lybeck caught 24 fish in fifteen days, with a total weight of 151 kg, and he salted the fish by the buckets. Aho once said that angling, just like any other sport, is fun when done as pastime, but it gets stressful when done with too much passion.

Aho was fishing with other methods too, not just with lures. In short story Se suuri syntymäpäivälohi, the fish is caught with a bait; exciting description is one of the best from Aho. The catch weighs a kilo, while the big ones continue to swim around. Aho’s sense of humour is best shown in the story Lastu siitä suuresta lohesta. Aho didn’t think bait fishing was a high-end sport – even though he used to use bait fish amongst other methods, like metal and silk, bait, even worms. Bleaks were kept in formalin solution to keep them firmer for easier hooking. When a large fish took the bait, the fish boy (Eemil Kokko) lit up a cigarette. After two or three hours of waiting, he got hungry. In the end it turned out that the large fish was only a chip that had broken off from a log.

Aho was a catcher of all fish, but his favourites were salmon, pike, perch and ide. You can see and hear game in the forests, but fish comes from an invisible world. Fishing is unpredictable, wins and losses are a part of it. The records aren’t be measured by a scale, but by overcoming difficulties; like a trout that weighs a quarter of a kilo and was caught with a worm.

Salaperäiset säyneet is a proof of this. Ide gave Aho the most emotional time in Vieremä’s river, while Juntta Tammi was angling. Ides were also caught from Porkkala and Huopana, when it was time to fish with water flies. Ide was a nice fish for an old gentleman, a slow prey for a fisherman in a summer’s night, using beetles, crickets, dragonflies, flies, or live bait as a bait. Aho realized that the wet fly needed to be replaced with a dry fly – this was the solution. 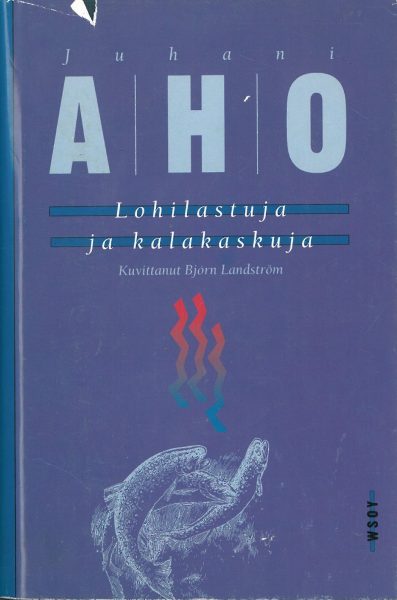 Skill – coincidence, luck – fisherman’s instinct, inspiration – excitement – inner impulse, now is the time to go fishing. When a grown man is fishing, he turns into a child again. The greatest satisfaction is the moment when you need something to eat tonight, and you catch something. Lure is fine, so are Devon and worm, and Aho thought it is just as great, difficult, and justified as fishing with bait fish. Using a worm requires casting skills, practice, and patience. The story Onnen ongella otettuja has a great description of worm fishing, techniques for streams, and how to catch a 3 kg trout. Lure gives a 5 kg fish, Devon 3,5 kg and 4,5 kg, the last of the fishing season.

A story called Myllärin housut, originally known as Kasakan housut, Aho follows the miller’s fishing preparations, the old beliefs of the fisherman. Boat trip begins, a big fish takes him to the backwater, and there he realizes that the fish was the miller’s trousers all along. The story was published in Finnish on 1915 and in Swedish on 1918 (just like Hihhei, sen tuuli vei) in Tidskrift för Jakt och Fiske -magazine.

Stenofylax Stellatus is a scientific name of a caddisfly species, but it is also the most in-depth story about fly fishing. It was first published in Tiede ja elämä -publication on 1919. When the said species matured, the biggest fishes were caught from the rapids. Year after year, Aho was fishing more with a fly, collected samples, sent them to England to get more information, and asked for details of the species and its habits. The story has a great description of the year-long cycle of life of a water fly and fly fishing. The catch is large fish, 4 kg and 6 kg males, 5 kg female, and a fourth fish, making the total weight 20 kg.

Fishing trips to Huopana are the core of the book; Aho’s first visit to the rapids, visiting the place during summer, relationship with the surrounding area, the equipment, the fishing, the fishing buddies, the occasional plentiful catches and cooking them, which are realistically described in great detail.

Everyone who’s read Aho’s Lohilastuja ja kalakaskuja has their own opinion of it. I am fascinated by the vibrant storytelling, sudden turns which are hard to predict, and the energy. The stories have interesting thought processes, waves and vibrations, impatient waiting, restless thoughts, rituals to calm one’s mind, freely flowing Huopanankoski and the dusk, preparation and waiting, being on your toes, bending rod and a noisy reel, will you catch it or not, coincidences, and other aspects that one has to deal with when angling.

These are the things that create Aho’s unspeakable power of the strong interactions between imagination, hope, and reality, which are authentic stories of life. World-class literature.